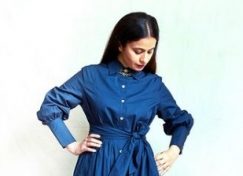 Mumbai, June 24 : Actress Rasika Dugal had some wardrobe tips for fans on Thursday, which she shared on Instagram.

Rasika posted an image dressed in a long blue dress, and shared some advice on how to wear an outfit.

“Essential steps when you wear an outfit: Step 1: (and most important)… Look for the pockets Step 2: Roll up those sleeves Step 3: Throw your hair back Step 4: Chin up and game face #OOTD #GoodVibes #Throwback #ThrowbackThursday #OOL2 #Promotions,” she wrote as caption.

Rasika has carved her niche on OTT with roles in web series such as “Mirzapur”, “Delhi Crime”, “Made In Heaven” and “Out Of Love”.

She was recently seen in season two of “Out OF Love”, directed by Oni Sen and co-starring Purab Kohli.

The actress will be soon seen sharing screen space with Naseeruddin Shah in “The Miniaturist Of Junagadh”. Incidentally, Shah was also her teacher at Film and Television Institute of India (FTII).  (IANS)

Rahul Dev recovers from injury, is all set to start work