Ayushmann: I want to entertain people with positive message 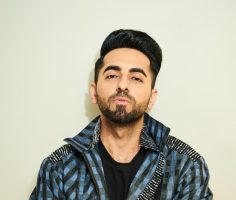 Ayushmann says: “It is hugely exciting for me to collaborate with some master storytellers who have some disruptive stories to tell and inspire audiences with. I want to tell audiences to expect the unexpected from my next four films.

The actor, who has delivered eight back-to-back theatrical hits in a row, added: “I have been fortunate enough to get some remarkable scripts ever since my debut and be part of incredible visions of powerful filmmakers wanting to make a difference to society. The storytellers of these films have some brilliant concepts that people haven’t seen on screen before and that’s what makes them really special for me.”

The 37-year-old actor considers himself an entertainer who is looking to deliver a positive message to society through his films.

“As an artiste, you only want to entertain and I want to be able to entertain people with a positive message that will hopefully affect some social change,” he said.(IANS)

Deepak Dobriyal: Want to come out of cliche of ‘challenging roles’

Ram Charan on working with Shanmugam: ‘I’m having a fanboy moment on the…

Ranveer Singh on ’83’: An honour to be a part of cinematic telling of…