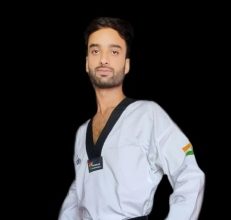 New Delhi, Oct 4 : The first Taekwondo player from Jammu and Kashmir Danish Manzoor has said that he is aiming to represent India at Olympic Games.

He made his team India debut in 2nd India Open International Olympic Ranking Taekwondo Championship, and was recommended by J&K Taekwondo Association as a potential athlete to participate in the first ever Olympic level camp under-the world’s number one Olympic level coach Paul Green of Great Britain.

Danish Manzoor was the first from North kashmir to ever qualify for the official Junior Nationals in Taekwondo and it’s still a record as no one has ever qualified for the same. It was 2013 when Danish secured a Gold medal in official State Taekwondo Championship and qualified for Junior National held at Puducherry after that he never looked back and continued his winning streak in this Olympic Sport.

“I am training under Master Atul Pangotra and am eying for the 2024 Olympics,” said Danish.

Hails from Gulshan Abad Colony in north Kashmir’s Baramulla district, the 25-year- youth has brought many laurels to the valley even in the past. Many times State Gold Medallist, In 2016, he won a silver medal in the Mahaveer National Taekwondo Championship organized by Taekwondo Federation of India at Rajasthan, and a Silver medal in Tokey Memorial National Taekwondo Championship at Ropar, Punjab, where he was declared as the Male best athlete of the tournament.

He represented Indian Taekwondo Team in the Men’s 58 weight category at Ramla Israel in Israel Open G2 Olympic ranking Taekwondo event and was sponsored by the Help Foundation; a J&K-based NGO, working for the betterment of society.

The championship was an official International Olympic ranking G2 championship organized by Israel Taekwondo Federation, where athletes from around 30 plus countries participated. (IANS)