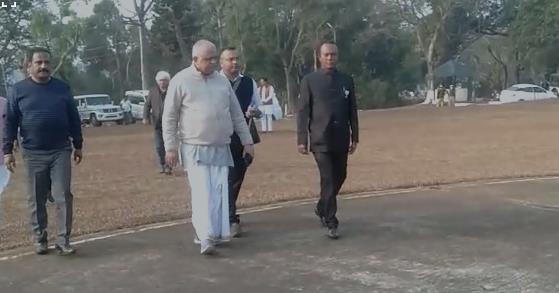 Tura, Jan 25: In what could definitely put the cat among the pigeons, BL Santosh, the general secretary of the BJP (Organization), went ballistic during a general meeting with party members this afternoon over what he called an attempt on politically decimate, South Tura MDC, Bernard Marak.

A delegation of the BJP’s top brass came to Tura to hold a meeting to work on deciding candidates for the upcoming polls. The meeting was attended by Rituraj Sinha (co-incharge of BJP- NE), Dr Numal Momin (deputy speaker of Assam), Earnest Mawrie (BJP state president) among others.

After the conclusion of the meeting, the BJP leaders informed that they would be releasing the list of candidates for all constituencies by Feb 2.

While speaking to party workers during their general meeting, Santosh went ballistic and promised political and democratic revenge against those that sought to harm Bernard by using the state mechanism.

“In 2010-11, the Congress party tried to the same to Amit Shah.  They even sent him to jail. Now you know Amit Shah is and where these people that tried to target him are. I assure you that in the same way, who ever tried to decimate Marak, should be taught the same lesson, whoever it may be” said Santosh to rapturous applause from the gathering.

Santosh asserted that political wars needed to be fought politically.

“They should not be taken to a personal level to harm someone’s life. They tried to harm Marak’s life and his family. Should we not take revenge for it politically and democratically,” he asked the gathering to a lot of vocal support from the group.

The BJP is set to be the last party to release their names of candidates in the run up to the polls, a strategy that they successfully implemented in many states before. Whether this actually helps the party in the upcoming elections will have to wait until the day of counting, March 2.