Paper Tigers on the prowl There has to be a method in this madness!
There is no other reason why a book of such length with two murders, one at the beginning and one at the end, may not be considered a book about crime by any standard. But it is in fact, not termed as one though you can see the design and the reasons why there is the making of crime fiction in the pages, especially because it is related to an industry that can make or break the political power of the country or the innocent lives of some.
Let’s start from the end, first.
A young girl, Sanjukta, fresh in the publishing industry, has been sent to a workshop on sexual harassment, all expenses paid, by her employer at News Today, Rajinder Kohli. The workshop is run by a well-known person in the profession running an NGO focused on doing work in this area. However, it appears that the leader of the NGO in fact has a problem, that being, alongside the classes on sexual harassment, he practices what he preaches!
The young girl experiences aggressive persuasion leading up to rape, where she has been enticed by this man in power who also happens to be a good friend of her mother. Sanjukta has not been able to be clear about her discomfort at these advances, and has now, with the help of her boyfriend and family, been able to lodge a complaint with the police, who are sluggish to act.
Rajinder Kohli, her own employer, who had sent her to the workshop in the first place, has shut himself out from this and has commanded his office not to support the girl in any way. 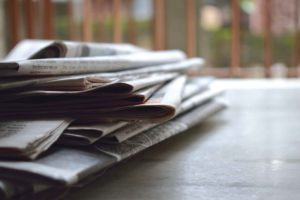 For his decision to do so, he must face the consequences in the most brutal manner by his own employee.
Woven in the pages of the book, Paper Tigers and Their Preys is the life of our protagonist — Amit Gupta, from a middle class family with a passion for sports journalism. It is lucky that the newspaper he grew up reading called Timeline has absorbed him, straight out of college as an intern. After being shuffled around doing multiple jobs as a ‘sub’, he is absorbed in the area of his interest, sports, all by chance.
Amit dreams of foreign trips and meeting sports stars he had only read about.
However, soon his dreams will be dashed as he learns that all foreign trips are planned and go to those who are well connected abroad with fellow journalists, so while reporting, the copy may just as well be a collection of paragraphs gathered from different quarters and strung skilfully together, while the journalist on foreign soil has a fair holiday, with wine and love interest thrown in.
Still, Amit does get small joys, travelling out to cities within the country. Amit is also under considerable pressure that he hasn’t received his salary for a long time. Rumours abound that the newspaper will be sold out to a fat business baron and so, salaries may be regularised. Amit carries on although he is gradually disillusioned by the profession. He falls in love with his colleague, Lilly, but unable to voice his feelings to her in time, he loses his opportunity. Slowly, he is engaged to Shanta, but there too, just as his marriage date is fixed, his father dies and the marriage is broken.
Amit leaves Timeline to join News Today. Love beckons again but his love goes for another toss as his lady, Ranjana, is caught in intra-departmental politics which sideline Amit and makes the editor leave the newspaper.
The paper folds up. Amit returns to the old News Today, where he finds balm to his yet again broken heart in Sanjukta. Amit is about to meet her ever busy parents when Sanjukta is sent to the workshop on sexual harassment that takes an ugly turn causing a turn of events that will make Amit wait to marry Sanjukta. Disillusioned with the life of a journalist, Amit is about to open up the Pandora’s box of vile and guile that go to make the most powerful industry in the country — media.
Wise Owl, the nom de plume of the author, has drawn up an engrossing story around Amit, following his life from a boy with a fine intellect and love of books, entering the world of power, the barons who make up the world of media. They have in their hand the most powerful weapon, the pen, far mightier than the sword, which is used as a vehicle in the hands of political power in the country, the very power, the pen/keyboard, has helped to bring to power. This is the irony of the situation.
The gloss and the grit of the life of a journalist is brought out with extraordinary skill and compassion as Amit travels through these corridors of mammoth business houses engaged in the state-of-the-art of generating opinions and discussions over truth and falsity that they publish for consumption.
The late nights, drinks and dinner on the house, including cozying up with a colleague in sly corners of the office, till wee hours of the morning next day, the ‘work-family’ often dislodging the real family, as night after night, journalists slog to put out the news that the masses consume the next day. It is the story of media mafia who grow fat and wealthy, by selling ‘packaged truths’ that determine whom they will wine and dine with and who will lick their shoes, during election times. Amit reveals with candid reality, the inside story of Paper Tigers roaming around preying on innocent lives, or using them to further their interest in the accumulation of wealth.
To me as a reader and a feminist, the stinking realities of this industry threw open yet another wolf in sheep’s clothing — the highly sophisticated media barons, who can’t take ‘no’ for an answer, or who will show off their power by the size of their cars and the length to which they can go, wielding their ‘power’ in their pants. And I am happy that it is one among their own gender who finally kills a symbol of patriarchy showing its worst face in support of the system. I am therefore, not writing about the murder at the very start of the book, which the reader must find out, by reading the book.
The language is impeccable and the book is easy to read as in, the conversations between different characters tell the story. You can sit back and read especially, if you are one of those who love a long story winding its way through your mind’s nooks and corners.
Personally, I would have preferred a tighter manuscript — a book, which I could start to read at Rajiv Chawk Metro Station in New Delhi and finish it by the time I have arrived at HUDA City Centre in Gurgaon, which is exactly one hour twenty minutes!
Finally, let me not leave the book without the mention of the cover and the title of the book. Paper Tigers and Their Preys is an apt title with visual that, in fact, cleverly summarises the whole book. It is provocative and no one can miss the predator at all.
Wise Owl, @hutomp on Twitter, who is the author of the book says, Brush Stroke/@newbrushstroke on twitter, the gifted brilliant illustrator, loves her mouse, keyboard and colours. Besides, for both the author and the illustrator, this is their first attempt to showcase their work in book format.

(The author is a New Delhi-based digital marketing professional)