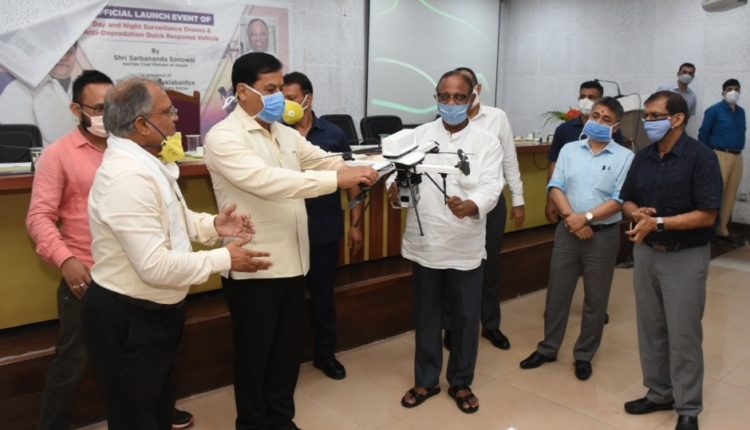 GUWAHATI: Wildlife surveillance in Assam has received a shot in the arm with the unveiling of special surveillance quad copters (drones) and an anti-depredation quick response vehicle here on Friday.

Chief minister Sarbananda Sonowal unveiled the drone and anti-depredation quick response vehicle which will facilitate intensified round-the-clock surveillance over the state’s forest cover to help rein in the increasing incidents of man-animal conflict.

“The day and night surveillance drone would be able to narrow-cast any purported movement of poachers and would delve a blow to poaching in the national parks, wildlife sanctuaries and other reserve forests in the state,” an official statement said.

Speaking on the occasion, Sonowal said that immediately after coming to power, the present state government had attached tremendous importance to enhance the state’s green cover including protection of its pristine wildlife.

“As a result of his government’s proactive steps, wildlife poaching including poaching of the world famous one-horned rhinoceros has come down phenomenally,” he said.

The chief minister further called upon the forest department to lend its synergistic efforts to enrich the state’s wildlife.

“Considering the immense inherent potential of the forest resources of the state, the department has to bear responsibility to enable the younger generation of the state to take pride of the verdant possibilities of the state’s flora and fauna,” he said.

As a result of initiatives taken by the state government, the forest cover has increased considerably. Moreover, the government has taken steps to plant 10 crore saplings and has already erected 33 highlands in Kaziranga National Park for the animals to take refuge during seasonal floods.

The chief minister also announced that a forest division for Borail forest range in Barak Valley would be set up for which he directed the forest department to take necessary steps.