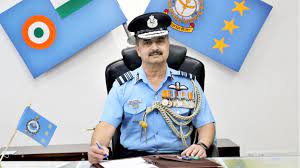 He will succeed Air Chief Marshal R.K.S Bhadauria who retires from service on September 30.

Commissioned into the IAF’s fighter stream on December 29, 1982, he has held various command, staff, and instructional appointments at various levels.

Air Marshal Chaudhari, who took over as the vice chief on July 1, has flying experience of more than 3,800 hrs on a wide variety of fighter and trainer aircraft, including missions flown during Operation Meghdoot and Operation Safed Sagar.

He is an alumnus of the National Defence Academy and Defence Services Staff College, Wellington, he has commanded a frontline fighter squadron and a fighter base.