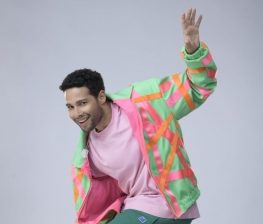 Mumbai, May 24 : Young Bollywood actor Siddhant Chaturvedi supports a campaign that gives him a chance to vibe with his tribe that is Gen-Z for him as he says they helped him to stay on the top of his game as an actor.

The actor becomes the face of the channel Zing and talking about the thought behind the campaign, Siddhant said, “The aspect of Gen Z not being understood is very real and I felt the same while starting out. It was my tribe that helped me keep my head in the game through that phase which is why I instantly connected with Zing’s campaign. It’s great that youth have a safe space that celebrates and vibes with them.

“My own introduction to the world of music was through Zing which makes this partnership even more personal and I’m super excited to be a part of Zing’s tribe!”

The channel Zing has started the new positioning through the campaign ‘Apni Vibe, Apni Tribe’ featuring Siddhant and planned to deliver captivating programming which tells modern stories through music, movies, and series.

Vishnu Shankar, Chief Cluster Officer, Zing, &TV and Big Magic said, “Zing is India’s foremost youth entertainment channel and we pride ourselves on having our finger on the viewer’s pulse. Our extensive interactions with youth across metros and tier 1 and tier 2 cities revealed a common grouse – ‘Koi nahin samajhta hummein’; we are expected to understand without being understood.”

He went on adding, “This feeling led us to our brand purpose and the latest campaign wherein we highlighted some of the key moments where they feel ignored or misunderstood. At Zing, we wish to create a ‘mahaul’ where the youth feel this is truly my space, my vibe, my tribe.”

Arghya Roy Chowdhary, Chief Channel Officer – Music Cluster said, “In India, Gen Z comprises the largest population segment and with our new identity we want to reinforce that we are an extension of their tribe. We are a channel that mirrors their life and lets them be themselves. With our new positioning in place, all we needed was the right brand ambassador, and given his personality, swag, and ability to connect with the youth, there is no one better than Siddhant!”

The channel will kickstart its campaign on May 25 with the launch of an exciting Brand film featuring Siddhant Chaturvedi.(IANS)

Rakhi Sawant reveals she got a call from her boyfriend’s ex, shares marriage plans