A review of the book The author very significantly starts off the book with the famous Oaten incident that took place in Presidency College, Calcutta. The poem that Prof Oaten composed as a tribute to Bose despite his being a colonial oppressor as well as experiencing ‘suffering’ at Bose’s hands, is a very interesting facet of Bose history.The anecdotes of people of Shillong in 1938, ( who are octogenarians now ) such as Kalpana Barua and Hironmoy Dhar, are extremely touching testimonies especially that Ms E. N. Shullai wanted to 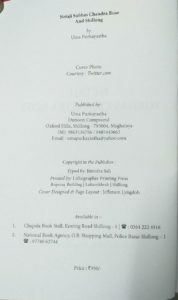 join the INA on hearing Netaji’s inspiring speech on the freedom movement of the country at Polo Grounds. What a different place our world was at that time. Polo Grounds was owned by the Shillong Club (all English members) so permission was not granted to the Congress for Bose to address the public there and the venue changed to a piece of land on the bank of the river Umkhrah! It is simply thrilling to learn from the book of incidents like the Rev J. M. Nichols Roy 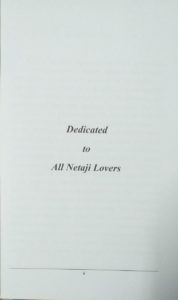 felicitated Subhas Bose at the Mawkhar Durbar Hall where villagers had gathered to have a glance of a great patriot and hear him speak.

Perhaps one of the biggest surprises of the book comes from St Edmund’s College. That a missionary institution in an era of British rule could host a revolutionary political stalwart, was only possible by the Irish Brothers.The contribution of Khasis to the cause of Subhas Bose is recorded by Dr Helen Giri who names the six brave hearts who joined the INA and were later became POW’S. Sri Dharthawma ( INA ) recalls at least forty Mizo youth who were enlisted in the INA. Considering that Nagas, Meiteis and Kukis cooperated with the INA during the Imphal siege and many from the Brahmaputra Valley and Surma Valley of Assam wholeheartedly supported Netaji, the book brings to light the remarkable history of the involvement of the people of the entire North East with Subhas Bose.

As the the author highlights in ‘Netaji ….. in Shillong’ and so do most of the eminent scholars contributing to the book; one of the greatest signifiers of Netaji’s visit in 1938 to Shillong for the North East, was the formation of the Congress Coalition Ministry headed by the remarkable leader, Lokapriya Gopinath Bordoloi. Shillong was then the capital of undivided Assam. So all the political action started once Netaji arrived in Shillong on the fervent call of Gopinath Bordoloi. Many political cross currents were at play to prevent the Congress from coming to power in Assam though the Muslim 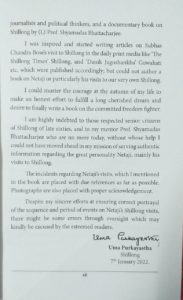 League had failed to face a no-confidence motion. With the need to oppose the vested interests of British support for Sir Saadullah, the Congress leader Maulana Abul Kalam Azad was deputed to tackle the crisis, which he failed to do. If the British Governor and British MLA had their way of installing a Muslim League government in Assam in 1938, it would have been another history for the Northeast and for India as well.
Though there are typo issues and printing errors in this book, yet the enormity of the subject and the ramifications of the political and historical context for us in the Northeast are so great that those are easily overshadowed and the book is a must-read for an understanding and awareness of our present historical and national entity.