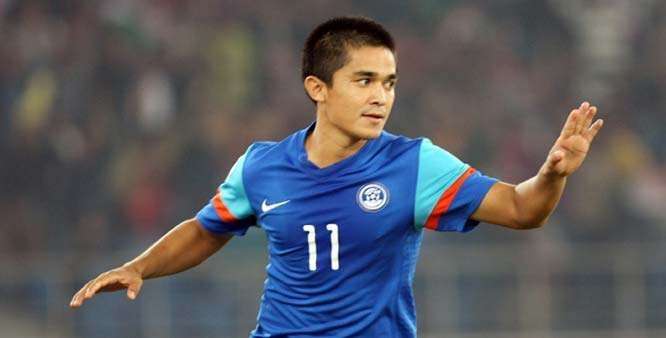 Bengaluru, Aug 14: Seasoned striker Sunil Chhetri on Sunday advised fellow players to continue giving their best on the pitch and not worry about FIFA’s threat of suspension on Indian football.
Earlier this month, world football governing body FIFA had threatened to suspend the AIFF and strip off its right to host the women’s U-17 World Cup in October due to a third party “influence”, the warning coming just days after the Supreme Court’s directive to hold elections of the national federation.
“I’ve spoken to the boys and my advice is to not give it too much attention because it is out of your control,” Chhetri said during a virtual media interaction organised by his club Bengaluru FC.
“People who are involved are doing their best to make sure that we are going to come out with the best results possible.
“Everyone is working hard towards it. As far as players are concerned we are going to make sure that we do our work properly.
“We have to make sure you better yourself as a player. Whenever you get an opportunity to represent your club or your country, put your best foot forward.
“All other verticals in the AIFF are trying to fix as much as possible to make sure that they come out with flying colours,” he said.
India is to host the FIFA women’s U-17 World Cup from October 11-30 and the Union Cabinet last month approved the Signing of Guarantees for hosting the women’s age group showpiece in Bhubaneswar, Goa and Mumbai. (PTI)