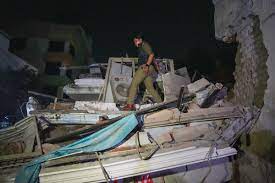 Lucknow, Jan 24: Around a dozen people who were trapped after a four-storey residential building collapsed in Lucknow’s Hazratganj on Tuesday have been rescued and a search is on for others, officials said here.
An Army team has also arrived at the spot, they said.
Uttar Pradesh DGP D S Chauhan, who was at the site, said, “Around 12 people have been rescued. This is the hour of patience, not the time to rush because when you are cutting a building, it should not create any other problem. Rescue work is being carried out in a very scientific way, and I am confident that those who are trapped inside (under the debris) will be saved.” Asked what may have caused the collapse, Chauhan said, “The reasons will be known when the experts and the police carry out their investigations. As of now, as per our assumption, which is based on feedback from family members, around five-seven people are still inside (the debris).” The DGP added that the rescue operations will continue for another 12 hours.
District Magistrate Suryapal Gangwar said NDRF and SDRF teams are engaged in rescue operations. “So far, 11 people have been rescued, and five more are possibly trapped. As per the clues obtained from the site of the collapse, the NDRF and SDRF teams are cutting the walls, and after cutting the walls, (trapped) people will be rescued.” “Chief Minister Yogi Adityanath is keeping a watch on the rescue operations. The defence minister has also given instructions. An Army team has arrived here for rescue work,” he added.
Asked if the building collapse may have been caused by an earthquake earlier in the day, he said, “This is not the right time to deliberate on the reasons. At present, the rescue operation is going on.” (PTI)

Chandigarh dist court gets bomb threat, turns out to be hoax

No new case in Mumbai for first time since pandemic began