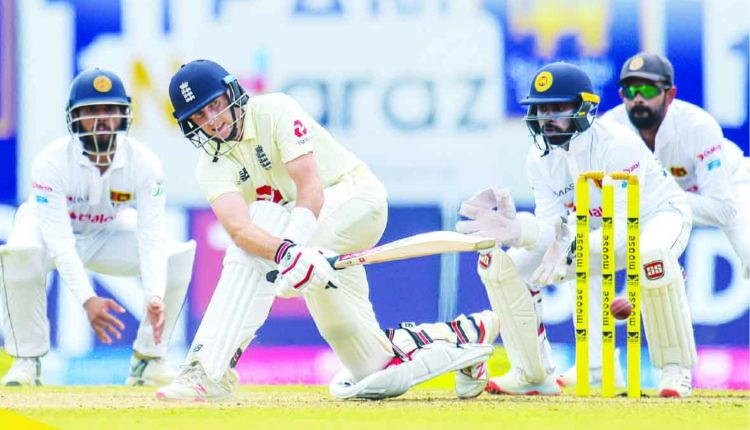 GALLE, Jan 15: Joe Root notched his first Test century in more than a year and Essex batsman Dan Lawrence made an impressive debut as England took control in a rain-affected first Test against Sri Lanka on Friday.
Root was unbeaten on 168 off 254 balls and Lawrence made 73 off 150 balls with England cruising to 320-4 before rain denied further play on Day 2 after tea.
The visitors now lead by 185 runs with six wickets in hand on a wicket that has started to show signs of plenty of spin.
England had rattled Sri Lanka for 135 in the first innings inside the first two sessions on Thursday with offspinner Dom Bess claiming 5-30 and Stuart Broad picking 3-20.
Root and Lawrence defied Sri Lanka’s plans with a 173-run stand as wicketkeeper Niroshan Dickwella twice missed opportunities to hold onto the edges off Lawrence’s bat.
Off-spinner Dilruwan Perera finally got the breakthrough late in the second session with the second new ball when Lawrence gloved a catch to forward short leg.
The Essex batsman showed lot of maturity in his debut Test with his back foot and front foot drives and even played exquisite cut shots against spinners. He hit six fours and his debut half century also included a six over midwicket off Lasith Embuldeniya, Sri Lanka’s most successful bowler at 3-131.
Earlier, Root survived Sri Lanka’s leg before wicket television referral off Perera’s second ball of the day after the start was delayed 70 minutes because of rain.
But Embuldeniya got overnight batsman Jonny Bairstow caught in short gully. Bairstow couldn’t add to his overnight 47 but added a vital 114 runs with his skipper.
Root, 66 overnight, completed his 18th test century and second in Sri Lanka with a single in the first over after lunch off 163 balls with seven fours as the England captain grew in confidence.
It was Root’s first Test century since scoring 226 against New Zealand in Hamilton in November 2019.
Root continued to dominate the spinners and reached 150 off 225 balls when he guided Embuldeniya behind point for a single. (AP)