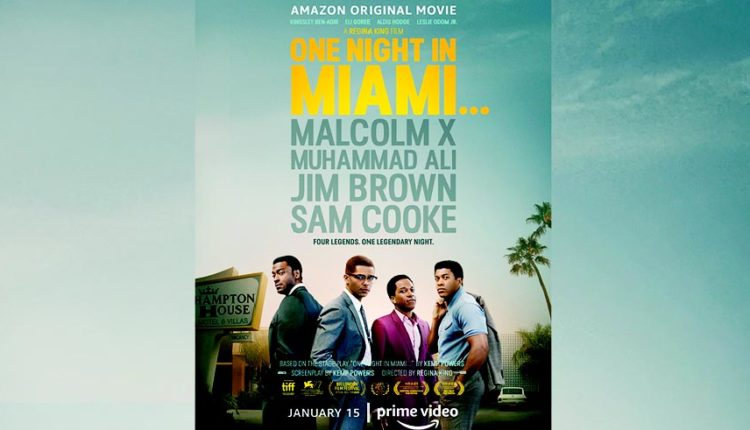 On February 25 in Miami of 1964, Cassius Clay became World Heavyweight boxing champion beating Sonny Liston. The win is widely believed to be the point from which Clay’s career soared. Name, fame and wealth followed for the budding boxer, who would become a phenomenon. He would also become Muhammad Ali.
Actress Regina King’s debut directorial feature is about what happened after Clay’s momentous victory, over the course of the night that follows.
King calls the shots on a story that captures a truly interesting moment in Black history — one where iconic human rights activist Malcom X invites over soul legend Sam Cooke and American football star Jim Brown, to celebrate Clay’s famous victory.
The night in the hotel room, where Malcolm X (Kingsley Ben-Adir) sets up his ‘party’, is unusual. Clay (Eli Goree), Cooke Leslie (Odom Jr).and Brown (Aldis Hodge) arrive to find there is no music to groove on, or drinks being served. Rather, Malcolm X is about to ‘serve’ them some profound thoughts all night long, which could have lasting impact on their lives.
King’s approach is obvious. She was drawing from Black America’s history to try and understand the nation’s present. At a time Black Lives Matter has been a pertinent movement in the US, King’s effort, based on a Kemp Powers play of the same name, uses an imagined conversation between four Black luminaries of the era to understand race and racism.
Powers has incidentally written the screenplay of the film, and the outcome is twofold. First, for most parts, the film is structured like a play. Second, Powers gives voice to Clay, Malcolm X, Cooke and Brown, to share their opinion on Black society, its past and future.
For a film where much of the ‘action’ takes place through conversations, screenwriting becomes vital. Powers was clearly relishing the play of ideas and words he uses to set up the discussions and arguments. Malcolm X’s idea was to bring together the three Black achievers and get them talking. Locked away in a hotel room and far removed from public domain, the trio of Clay, Cooke and Brown share their opinions without the baggage of fame.
The film is cerebral, but not dour. King and Kemp have executed the story with ample humour. Regina King packs the film with thought-provoking discussions. At a time the notion of inclusivity is being aggressively promoted the world over, One Night In Miami is a reminder that conversation over racial discrimination is far from over. (IANS)