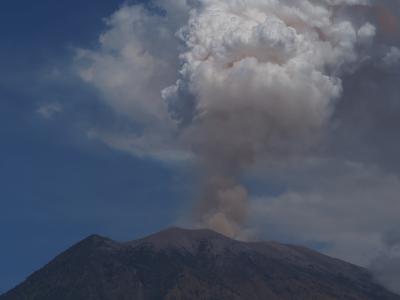 JAKARTA: About 550 people fled from their homes on Tuesday after the Semeru volcano on Indonesia’s main Java Island erupted, spewing incandescent lava and hot smoke, according to the National Disaster Management Agency.

Agency spokesperson Raditya Jati said that 300 of these people fled to an observation post, and the rest stayed at shelters, reports Xinhua news agency.

The volcano, located in the Lumajang district of the East Java province, erupted at 1.23 a.m. on Tuesday.

It released lava of up to 1 km and thick smoke of up to 11 km towards the Besok Kobokan area, southeast of the summit.

At 3 a.m., there was a downpour leading to the rain water mixing with the volcanic ash around the observation post.

“We estimate this condition happened due to the quite strong potential hot lava,” Jati said.

Currently, the status of the volcano’s activity is at the second-highest level or Caution.

The villages affected by the volcanic activities included Supiturang, Oro-oro Ombo, Rowobaung and Sumberwuluh, all in the Lumajang district, he said.

“There are several urgent needs, such as ready-to-eat foods, public kitchens, and masks,” Jati said.

The Centre for Volcanology and Geological Hazard Mitigation has recommended local residents not to carry out any activities in the dangerous zone within a radius of 1 km from the volcano’s summit, and of 4 km on its south-southeast slope.

The Indonesian authorities have distributed 4,000 masks and arranged a field evacuation post.

Semeru is the highest mountain on the island of Java. It is one of the most popular hiking destinations in Indonesia.

No separate constitution and flag for Nagaland: Governor