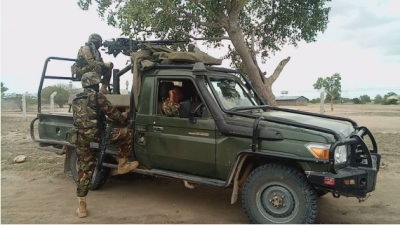 Nairobi, Oct 13 : A ruling by the United Nations’ top court on the maritime border dispute between Kenya and Somalia has drawn opposing reactions from the two neighbouring countries in East Africa.

The International Court of Justice (ICJ) ruled on Tuesday that there was no agreed maritime boundary and ruled largely in favour of Somalia which will get a big chunk of the 100,000 square-kilometer area that is potentially gas and oil-rich.

Kenyan President Uhuru Kenyatta has rejected the ruling, saying Nairobi is profoundly concerned by the import of the decision and its implications for the Horn of Africa region and international law generally.

“At the outset, Kenya wishes to indicate that it rejects in totality and does not recognize the findings in the decision,” Kenyatta said in a statement released on Tuesday evening, Xinhua news agency reported.

The Kenyan leader insisted the ICJ had no jurisdiction to hear the case but went ahead to, despite the objections that had earlier been raised by Kenya. According to Kenyatta, international tribunals have jurisdiction only to the extent of consent by a State.

Kenyatta also accused ICJ of unfairness and bias for refusing to allow Kenya to exhaust the use of regional dispute resolution mechanisms, despite the existence of a robust African Union legal framework on border issues and dispute settlement.

Kenyatta said Kenya was forced to withdraw its participation in the public hearings on March 14, noting that Nairobi doubts that any State would have appeared at all in a case such as this.

He however said Kenya is committed to a diplomatic solution to the current impasse, noting that Nairobi will resolve the sea border row through regional institutions and other bilateral arrangements.

However, in a televised address to the nation on Tuesday evening, Farmajo said the ruling was a historic victory for all Somalis and exemplifies the integrity and transparency of the ICJ.

“The federal government of Somalia hereby confirms that we accept the Court’s decision, in line with the international laws and norms. We hope that the Kenyan government will respect the supremacy of international law and will forgo their misguided and unlawful pursuits,” he said.

He expressed the government’s commitment to peaceful co-existence and cooperative relations between the two countries and their peoples, while creating a united front against terrorists who threaten the stability and security of the region.

Regional analysts say the UN top court’s decision could worsen the fragile relationship between the neighbouring countries since Kenya has been a major contributor of troops assisting the Somali government in its fight against the al-Shabab group. It could also have far-reaching security and economic consequences for future relations between the two countries.

Somalia took Kenya to the UN court in 2014 over contested parts of the Indian Ocean believed to have rich natural oil and gas reserves after years of diplomatic efforts to resolve the dispute failed.

Regional blocs had earlier prevailed upon Kenya and Somalia to settle the maritime boundary dispute out of court in order to avert diplomatic fallout that would impact on peace and stability.(IANS)